Then Samuel took a stone and set it up between Mizpah and Jeshanah, and named it Ebenezer; for he said, “Thus far the Lord has helped us.” 1 Samuel 7:12 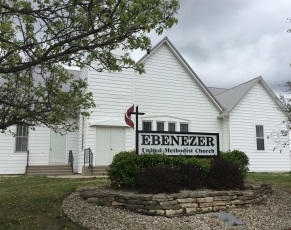 Last week I attended the memorial service for a cousin of my father’s. It was at the Ebenezer United Methodist Church, 3 miles south of Green and about 8 miles west of Leonardville. A group of German Methodists immigrated to the area in the 1870s and established the church, barely a decade after the Civil War. My great-grandfather, a child at the time, was among them. The remote location of the church is memorable, as miles and miles of farmland surround it. It is on the slightest of rises in an otherwise flat expanse of pasture, wheat, and soybeans.

Ebenezer UMC is a familiar church because of family reunions, funerals, and other gatherings I have attended there since I was a child. It is a plain, no-frills, wooden structure. There are no stained glass windows, no fancy stone or woodwork, and no vaulted ceilings. This church was built for function, not form, consistent with the folks it was built for – practical, down-to-earth, and humble. I always found Ebenezer UMC disquieting, due in part to its name. Perhaps it reminded me of Ebenezer Scrooge – bah humbug! Perhaps it was the puzzling line from an old hymn: Here I raise my Ebenezer; but something about the name made me think of ancient and haunted things. The church stands proud, however, on this unforgiving, horizontal vastness, tempting the unrelenting Kansas winds to blow it off its foundation. At least in my lifetime, no storm has phased it.

The biblical references to Ebenezer are in the Old Testament book of 1 Samuel. I assume the “stone” that Samuel placed was large enough to be seen for miles. That stone, which he named Ebenezer, stood as a symbol of God’s constant and helpful presence throughout their struggles. Before the Israelites crossed the Jordan River into the Promised Land, they gave up everything they knew for the promise of a new life. A group of Methodist immigrants gave up everything familiar and crossed the Atlantic Ocean for a similar promise of a new life. They landed in a vast country where they could eke out a reasonable living with the sweat of their brow. In the midst of this fertile soil, they erected a visible reminder that God is good; a place to call the faithful to worship and, in their time, to call the saints home. An Ebenezer – a symbol of hope, a reminder of God’s presence – is a good thing to have as we weather the storms of life. God is always near, but sometimes we forget. When we enter new life territory, when we feel lost and alone, when we need to remember, may there always be an Ebenezer in sight.

Come home to church this Sunday. Where is your Ebenezer?

May I pray for you?

Leave a prayer request in the comments section of the “Greg” page, and I will add you to my prayer list.

Check out my books and music. Information is posted on the "Books" and "Music" pages of this website.